Posted at 23:18h in Uncategorized by Dr. Vladimir Grigoryants 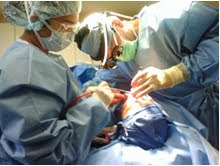 There are many things one can do overseas that are more cost effective. More and more companies are outsourcing work to other countries these days. However, one thing that should not be done in other countries is plastic surgery! Plastic surgeons in the United States are held to higher training standards than those in other countries. If you are going to a Board Certified Los Angeles plastic surgeon in the United States, you can be assured that you are not gambling with your health. Sometimes these procedures can be significantly more affordable, but it is not worth it to get a procedure done that could turn out to have serious consequences. When opting to get a breast augmentation Beverly Hills residents are much better off staying in the United States!

Any surgical procedure can lead to risks and side effects. Pain, dizziness and nausea are very common, but there are more serious side effects which a foreign facility may not be able to treat. Significant bleeding, infection at the site of an incision, accumulation of fluid beneath the wound and others can occur during the procedure. If these aren’t treated properly, the problem can get much more serious and another surgery might be needed. In the United States, these problems can still occur, but an accredited facility is much better equipped to handle these situations. Mexico and Thailand are two of the most popular places to get plastic surgery abroad. Although these two countries will often have better facilities than some other countries – especially those in South America – they are still not going to be as safe as those in the United States.

Many of the activities associated with postoperative traveling also increase the risk for complications. When you are traveling in a car, airplane, or train, it is inevitable that you will have to do somewhat strenuous activities. For example, bag lifting and standing for long periods of time can increase recovery time and risk of complications. According to the American Society of Plastic Surgeons, infection is the leading complication among traveling patients. In addition, traveling is also associated with higher swelling, blood clots, and pulmonary embolism rates. When traveling abroad for a breast augmentation Los Angeles patients often find themselves visiting American facilities to get secondary treatment.